Standing before the Museo de la Batalla de Bailén (Museum of the Battle of Bailén), this is the start of a journey into the heart of Bailén’s historic quarter. Later, the Plaza de General Castaños or “El Paseo” (The Avenue) will open up to us to connect with some of the town’s most relevant streets, including Zarco del Valle and María Bellido, taking us to the place where local heroine, Maria Bellido, once lived, in the surroundings of the iconic Glorieta Virgen de Zocueca, known as “la Carrera”.

The roads of Cristóbal Colón (Christopher Columbus) and Isaac Peral will take us back to Isabel la Católica or calle Real, as it is known here.

In it, we can see the façade of the Sagrado Corazón de Jesús (Sacred Heart of Jesus) School, residence of the sisters of San Vicente de Paúl since 1916.

On this journey through Bailén’s history, the façade of the Palacio Ducal (Ducal Palace), belonging to the Ponce de Leon family, is the next stop on the walk. It is a symbol and reminder of what was once the town’s fortress and home to the Counts of Bailén.

Next to it, the Ermita de Nuestro Padre Jesús (Hermitage of Our Father Jesus) from the 18th century was once called the Ermita de Santo Cristo de Nazaret (Hermitage of the Holy Christ of Nazareth), which could be seen from the ancient Camino Real, since it was surrounded by just three houses.

The Casa Consistorial (Town Hall) positions us at the heart of the town, admiring the oldest and recently renovated Plaza de la Constitución. Now it is time to admire an architectural jewel from the 15th century, Iglesia de la Encarnación (Church of the Incarnation), declared Historic Artistic Monument in 1983.

We will continue our journey along Calle Armargura, a road with a special meaning during Bailén’s Holy Week. Here we will point out the Casa de la Cultura (House of Culture) as we go down the Calle héroes de Bailén.

In the last section of the walk, we will let our imaginations run wild, given that we will be immersed in the spot where the ancient castle of Bailén once stood. As we walk up the street that refers to it, we will find the Plaza de España, where the monument to General San Martin will show us the way to reach Plaza Reding, in honour of the General who put Castaños’ plan into action and that would help them to defeat the unstoppable Napoleaonic troops. After this stop, the calle América will serve as a link to reach the end of our walk at the Ermita del Santo Cristo (Hermitage of Holy Christ) which dates back to the 18th century. 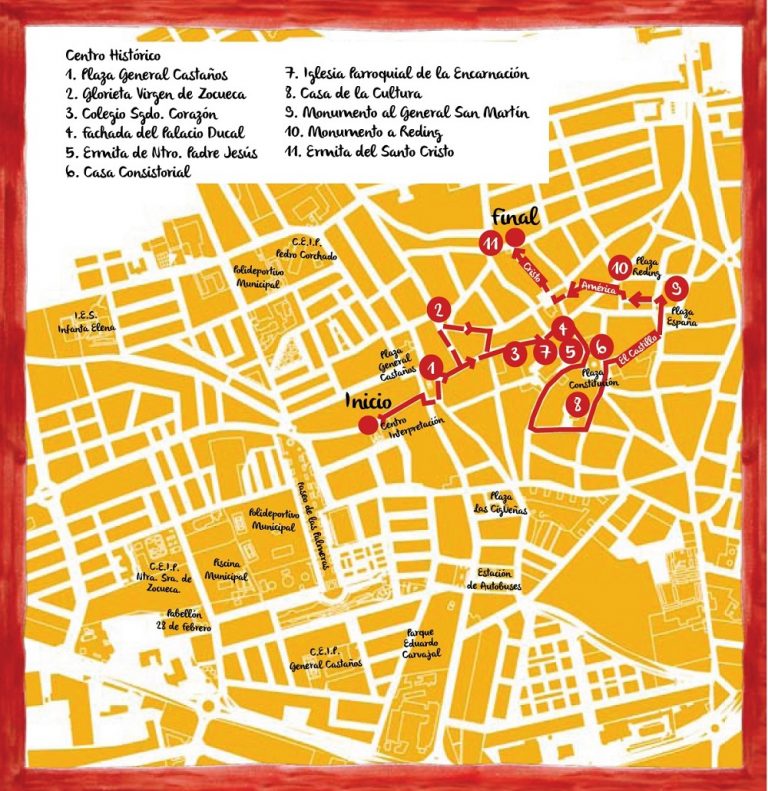