This unique walk starts in the Plaza Príncipes de Asturias, situated next to the Museo de la Batalla de Bailén (Museum of the Battle of Bailén). This small and welcoming park pays tribute to the BRIMZ “Guzmán el Bueno” (Guzman the Good) X, since the town of Bailén has a special relationship with the Armed Forces.

Next to this square, calle Cronista Matías de Haro, a street named after a local chronicler who has shown us the historical evolution of our town, will lead us to see one of the town’s most wonderful parks, the Paseo de las Palmas with its 77 palm trees, accompanying the allegorical monument to the Battle of Bailén.

Behind the monument, calle Plácido Fernández Viagas will guide our journey, taking us to the left-hand side of Plaza Yapeyú which links with Avenida del Parador. It was built in tribute to the birthplace of General José de San Martín, who played one of the leading roles in the Battle of Bailén.

By its side, the Eduardo Carvajal Park, with an extraordinary botanical wealth, is popularly known as “El Vivero” (The Nursery). Its legends include “La Encantada”, told by its former gardener.

At the end of Avenida del Parador, the Monument in honour of María Bellido, the heroine of Bailén, and known by everyone as “la Culiancha” welcomes everyone that comes to the town. Next to it, the new Europa Park is home to the old fountain from the Plaza de la Constitución, a symbol for the inhabitants of Bailén.

Another natural space that we will come across will be the Plaza Spetses, a true reflection of the union between towns.

Plaza de las Cigüeñas will be the next stop on the journey, to admire the ancient tower, a resting place for migratory birds.

As we enter the heart of the town once again, through calle Sebastián Elcano, we can greet the Roman Goddess Iberia in Plaza General Castaños.

We are at the end of our walk, where the town’s oldest square awaits us, and which has recently been remodelled, Plaza de la Constitución, followed by two spaces dedicated to two of the outstanding characters from the Battle of  Bailén, José de San Martín in the Plaza de España and Teodoro Reding  in Plaza Reding. 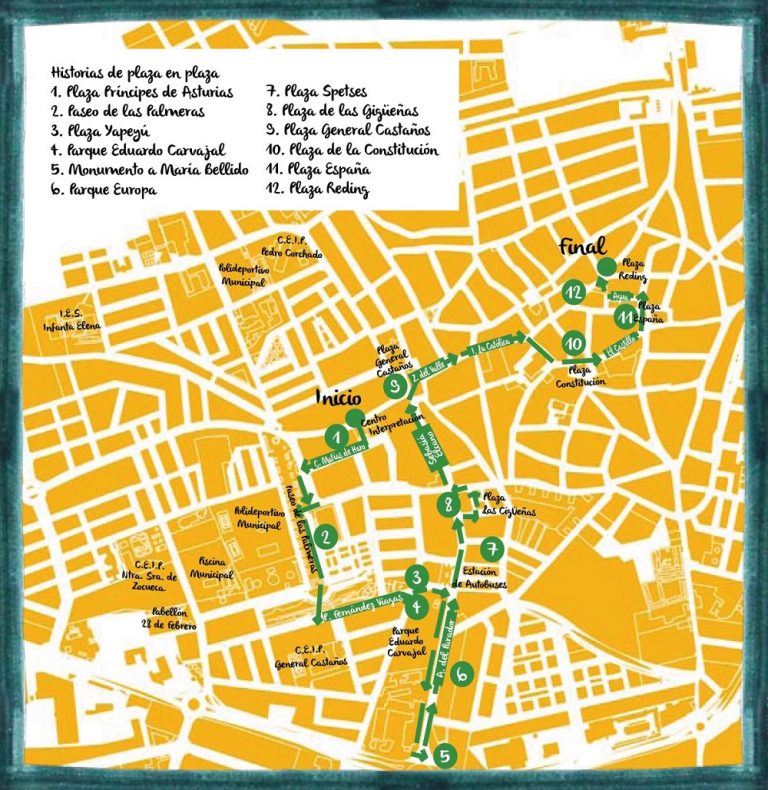